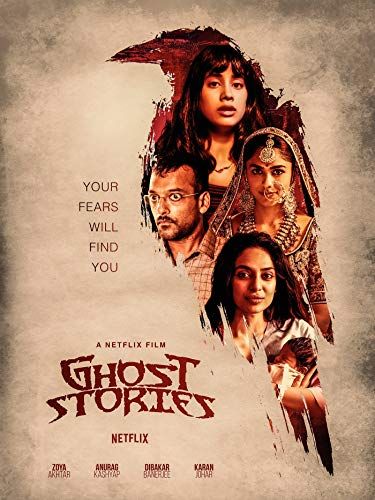 The winning team of LUST STORIES unite to tell some spine - chilling tales. Ghost Stories is a 2020 Indian anthology horror film, consisting of four short film segments directed by Karan Johar, Dibakar Banerjee, Zoya Akhtar and Anurag Kashyap. It serves a sequel to the 2013 and 2018 films - Bombay Talkies and Lust Stories respectively. Segment Number One concerns Mrs. Malik, an elderly woman who has recently had a stroke and is bedridden. Her new nurse/attendant Sameera arrives to take over from Mrs. Malik's son, and although she seems intent on her job her attention wanders thanks to her concern over her affair with a married man. While he is visiting her one night at the old woman's apartment, it appears someone else is also there. Tale Number Two: While he spends time after school with his pregnant aunt a young boy becomes increasingly jealous of her unborn baby while her protection of nesting birds becomes increasingly problematic. Tale Number Three: A man visits a small town as part of his job and is horrified to be told by two children that one of their father has been eaten by the other's. Although he disbelieves them, he begins to see they may not have been lying. The final story concerns a bride who marries into an established family and begins to worry that her new husband is depending too much on his Granny's approval, since Granny died twenty years before.

May the Devil Take You: Chapter Two

One Night in Bangkok

Don't Let Them In

The Bay of Silence

Attack of the Unknown

Attack of the Unknown